The initial working title for this essay was ‘Meditation on a Cross’. The religious connotation was tongue-in-cheek, but I first thought of the cross in general terms. On a mundane level a mark in the sand that a child could make with their foot or a stick came to mind. Getting deeper, the beginning of written languages, such as the scratched sign on a rock will forever fascinate. As if to say, “I was here”, the pre-historic hunters in Upper Paleolithic Europe 20,000 or more years ago may have been continuing to develop one of the earliest forms of code that have lead to what we now call visual culture.

In a refreshingly modern and contemporary environment provided by the saasfee*pavillon space, this body of new works from Dennis Loesch will surely feel at home. When I heard that Loesch’s new body of work was to be staged there it felt appropriate, not only because this is his home city and he studied at the Städelschule Academy of fine arts, but also because of his personal interest in avant-garde and cross-cultural musical genres. 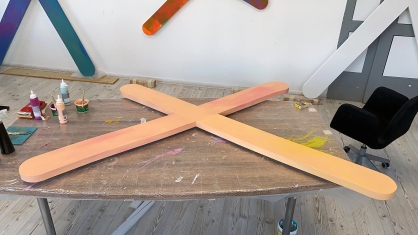 It’s a late Friday afternoon in early-August, and Dennis Loesch and I exchange comments on WhatsApp about his forthcoming installation at the saasfee*pavilion. I have asked what will be in the show: “…all unique. 3 huge ones, 4 a bit smaller, 10 small ones… leaning, floor and hanging”, he replies. “X Cellant”, I respond, trying be clever with the X from the English word ‘excellent’ (ausgezeichnet in his native German). I don’t know if he gets my reference to Germano Celant and Arte Povera. It would have helped if I had spelled the Italian art critic’s name correctly. Not that the use of ‘poor materials’ are especially featured in Loesch’s work but there is something of the everyday in his choice of subject matter (including artefacts such as memory sticks and SD cards from digital technologies). As a contemporary artist with an attraction to bright, vivid colour and graphical, geometric visual forms with Photoshop quality gradations of colour or flat but painterly surfaces, Loesch embraces the digital realm, its appearances and production techniques, with great enthusiasm and ongoing engagement. Even in reproduction the form, surface qualities and colouration is attractive – even sexy.

One of the larger ‘State your position’ (SYP) forms has fascinated me for several weeks now. Not just as a visual artefact but for the title too. Is this a question, or an instruction? It could be a phrase requesting a point of view or it could be a geographic location that is sought for safety reasons. The titles of artworks typically pertain exclusively to the subject matter, as in a portrait or landscape work, but SYP purposely acknowledges the viewer who thus becomes a more activated, self-reflective, participant.

‘State Your Position’ presents seventeen ‘X’ forms in a configuration that will undoubtedly engage the audience both visually and physically as they negotiate the gallery space. Although for safety reasons none of the artworks can, after all, be positioned to lean against the walls, using the floor as well as the wall space will actively undermine pictorial notions that generally command wall-hung works. A degree of minimalist objecthood will possibly prevail, although the indicative subjecthood from such an open-ended and multiple meaning sign as an X is surely present, compliments of the viewer.

Despite being so skilfully manufactured with the aid of Computer Numerical Control to control the movement of the cutter and highly skilled technician assistance for completion, these particular ‘one-off’ Xs are unique. As objects that have been produced to Loesch’s specifications they each reproduce a digitally handwritten gesture made with the computer mouse – a fascinating contradiction of technologies. Another paradox I find is that the imagery suggests two-dimensional delineation, but these are also moveable three-dimensional forms that could as easily be defined as sculptures, albeit in the unmonumental camp. But any Dada-istic tendency is subverted by rather wonderful colours and subtle textures across the front and sides of the forms. They are eye-pleasingly pleasant with a decorative energy that induces enjoyment.

Alternatively, Loesch might be playing with his audience, commandeering an innate sense of humour that embraces irony. The X form, with all of its semiotic potential, can mean anything between the poles of seriousness and triviality, sign and symbol. Just how meaningful can a strong graphical and visual statement be? Placed into a gallery/fine art context do we assume profundity in whatever ‘message’ might be invoked by such a simple form? Or is the artist undermining the sophistication of an audience that is attracted to contemporary art by a token of innocent banality? Alternatively, art can be fun, like fashion clothing. At once visually entertaining and pleasingly simple, reminding us to accept that since Duchamp fixed formulas and old world hierarchies are now disempowered in art. Which leads me to wonder if Loesch’s Xs in SYP are paradoxical Readymades? Virtual digitally derived realities, returned to substance.

Unless the artist makes an honest statement of intent (and let’s hope he does not, for the sake of the viewer’s imagination) it appears that a speculative environment is made manifest by this assembly of Xs in the saasfee*pavillon space. After all, despite the high quality aesthetics and design profile of these forms, visitors will be encountering ‘art’ forms, not artefacts or a scattered stockpile of road signs from the Frankfurt City Council.

Returning to the notion of audience the context of the gallery/cultural space might shift the balance of interpretation for sign to symbol in the SYP collection/series. In Jung’s final piece of writing, aimed at a general readership, ‘Approaching the Unconscious – The Importance of dreams’ he explained that signs:

“… are meaningless in themselves, they have acquired a recognizable meaning through common usage or deliberate intent. Such things are not symbols.”

“What we call a symbol is a term, a name, or even a picture that may be familiar in daily life, yet that possesses specific connotations in addition to its conventional and obvious meaning… Thus a word or an image is symbolic when it implies something more than its obvious and immediate meaning.”

Loesch’s SYP Xs might be playing with this definition. 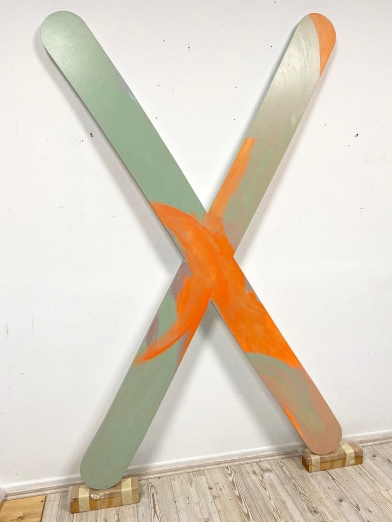 The adaptation and confident interest in digital processes and formulations certainly states the position that Loesch occupies as a contemporary practitioner. He accommodates the digital, whilst more than referencing the tactile visuality of form and the unashamed rapture of colour. One way to approach these works might be to follow Daniel Buren’s advice that, “My painting, at the limit, can only signify itself… It is. So much so, and so well, that anyone can make it and claim it.”

Works transcend themselves and individual experiences let us know we are here: it’s a sign o’ the times…

An extended version of this essay will be published on Saturation Point with final installation photographs. http://www.saturationpoint.org.uk/ 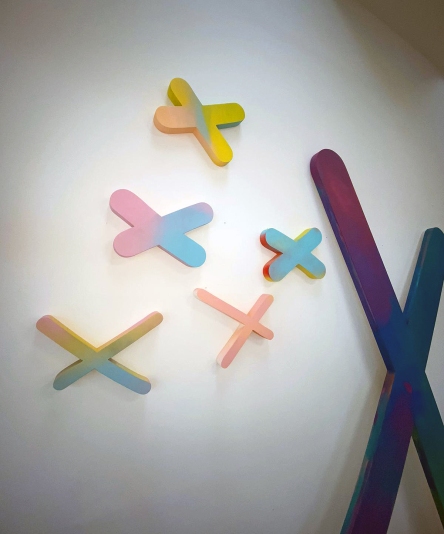 AbCrit article on Dennis Loesch at PM/AM by Geoff Hands-